As the economy continues to reopen, it appears poised to recover a year’s worth of lost activity and to return to pre-pandemic growth rates, or better. Preliminary indications are that first quarter GDP rose at a 6.4% annual rate and second quarter GDP is expected to be even more robust, perhaps topping 10%. However, with such expectations come potential pitfalls, among which could be labor shortages, rising inflation, or on the other end of the spectrum, a return to lockdown conditions. Certainly, if growth proceeds as projected, sustainability of such growth is limited, and a more normal pattern must be achieved. Recent economic data has been largely positive, including the March personal consumption expenditures, which rose by 4.2%. Consumer confidence rose to 121.7 in April from 109.0 the prior month. March retail sales spiked, rising by 9.8%, starkly contrasting February’s decline of 2.7%. Similarly, trends in construction spending, employment, and personal income all point to economic strength. Conversely, the ISM Manufacturing Index for April disappointed at 60.7 versus the expected 65.0 and March’s 64.7, although it remains solidly in expansionary territory. Going forward, the Fed will likely have a difficult time balancing between allowing the economy to become overheated and protecting it from a coronavirus-related relapse. 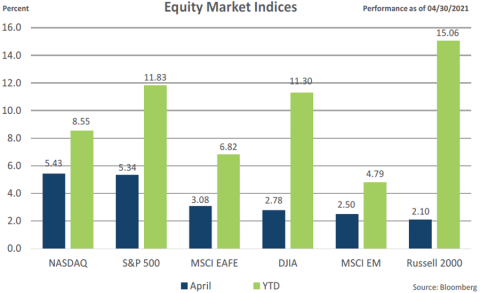 Equity markets continued their upward trend in April, with broad participation across indices and sectors. The NASDAQ Index returned to the top of the leaderboard for the month, posting a 5.43% gain, allowing that index to make up ground recently lost to other domestic indices. The Russell 2000, despite trailing other major indices shown at right with a 2.10% return for April, still leads the same group for year-to-date returns with an impressive 15.06% gain. Both developed and emerging market international indices continue to trail domestic indices for the year to date, at 6.82% and 4.79%, respectively. All sectors within the S&P 500 enjoy positive returns for both April and YTD — albeit with much disparity and volatility displayed month-to-month. 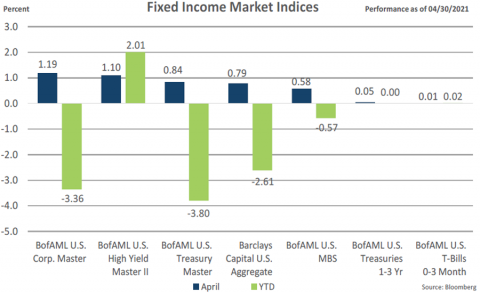 In a reversal of the prevailing trend of the past several months, longer-term Treasury yields declined during April, with both the 10-year and 30-year Treasury yields finishing 11 bps lower. With yields on short maturities remaining largely unchanged, the yield curve assumed a slightly flatter form. These generally lower yields led to positive returns on bond indices across the spectrum (as bond prices move in opposite direction of interest rates). Corporate bonds, riding the coattails of a positive equity market, saw spreads tighten. This enabled those issues, both investment-grade at 1.19% and high-yield at 1.10%, to lead performance of fixed income indices for the month. The Federal Reserve continues to leave the Fed Funds rate unchanged and near zero. 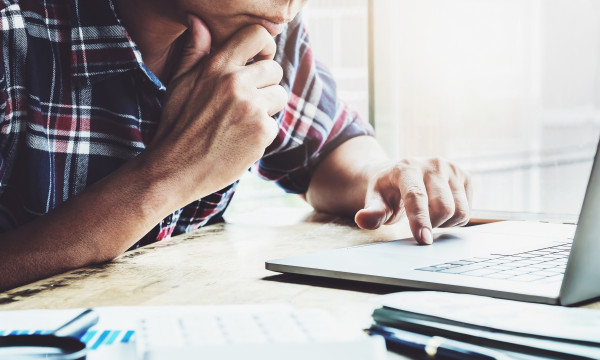