COVID-19 continued to dominate the news in financial markets and the world economic stage in February. Following Treasury Secretary Yellen’s urging to G7 leaders to “go big” with additional fiscal stimulus, the executive and legislative branches appear to be making progress toward another package. Such stimulus packages typically invigorate financial markets. However, skepticism may be warranted as it is unlikely that much of the funding will end up in the hands of the consumer and fears of the sustainability of government deficits continue to grow. The supply and number of shots of the COVID-19 vaccine given continue to improve slowly, despite weather-related issues and some frustration in making appointments. More doses will soon be on the way, though, as the FDA has issued Emergency Use Authorization for Johnson & Johnson’s single-dose COVID-19 vaccine. A deep freeze hit the middle of the United States in February, and Texas suffered the impact of blackouts, causing oil production closures. This event, intensified by renewed curbs on domestic oil production, led oil prices higher, closing the month at $61.50 — up from last month’s $52.16 — and inflating U.S. gasoline prices. Sentiment in the manufacturing sector improved and surprised in February, with the ISM Index at a bullish reading of 60.8. The unemployment rate continues to slowly recover from pandemic levels at 6.3% in January, down from December’s 6.7%. Finally, the consumer remains surprisingly robust as January’s retail sales grew by 5% from the previous month. 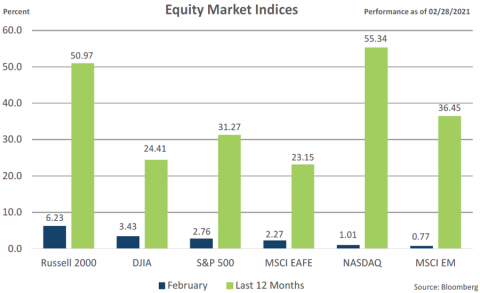 Equity markets maintained their strength in February, with positive results across the spectrum of indices. Small-cap issues continued to outperform large caps, as apprehension over the sustainability of growth for large-caps led to some profit taking and bargain hunting continued for small-cap issues. The DJIA posted six new closing highs for the month and the S&P 500 posted five, as the S&P 500 closed above 3,900 for the first time. Within the market, the energy sector, riding the coattails of higher oil prices, dominated sector returns with a nearly 23% gain in February. Utilities trailed sector returns, losing more than 6% of value. Across the board, seven of the 11 sectors gained for the month. Going forward, however, equities are likely to be facing a headwind as bond rates continue higher.

Bond yields rose significantly in February, and the yield curve steepened, leading to negative returns for most fixed income indices. The 10-year Treasury Note closed at 1.40%, up from last month's 1.07% and 0.91% at year-end, while the 2-year note rose only 2 bps to yield 0.13%. Short rate stability can be attributed to Fed Chair Powell confirming that the Fed Funds rate will remain low until the economy recovers from the COVID-19 pandemic. However, the rising inflationary fears associated with a prolonged period of low borrowing rates has led to higher long rates. Subsequently, index returns were largely tied to the maturities held in each. High-yield bonds, whose returns are typically more closely correlated with equities, provided the exception, posting a 0.35% return for the month.