With the wild year of 2020 behind us and the hope of a return to normalcy ahead, January provided glimpses that either end of the spectrum remains possible. With fourth-quarter GPD increasing by 4%, real GDP for 2020 decreased by only 3.5%, which, given all that transpired, represents a fairly resilient economy. Nonetheless, the annual contraction in the U.S. economy represents the first such decline since the 2009 housing crisis. While December manufacturing payrolls rose by 38,000, up from 35,000 and better than the expected rise of 25,000, non-farm payrolls contracted by 140,000, much worse than the expected increase of 100,000. On the balance, however, the labor market steadied, with the unemployment rate remaining at 6.7%. Construction spending maintains its solid footing, as do housing starts and new home sales, providing much-needed support to the economy. Consumer confidence improved slightly in January, up to 89.3, yet remained substantially below pre-COVID-19 levels, which hovered in the 120s and 130s. The January ISM Manufacturing Index reported at 58.7, indicating optimism within that sector, though it fell short of expectations of 60.0 and the previous mark of 60.5. Going forward, the balance between the stimulating effect of reopening the economy and the restrictive possibility of proposed legislation, executive actions, and unforeseen events will surely dictate the shape of the upcoming year. 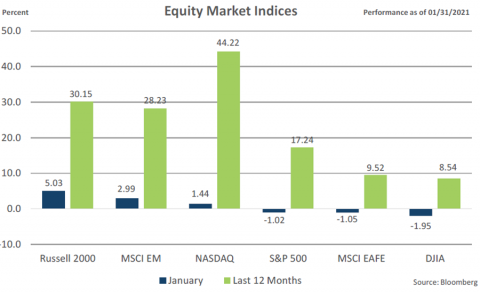 January witnessed a mixed bag of stock market results, with significant variation of returns between indices. Though these variations have become somewhat common, volatility of these differences appears to be gaining steam. Leading equity indices for January was the Russell 2000, which posted a gain of slightly more than 5%, while the Dow lost nearly 2% for the same period. Within equity sectors, fourth-quarter equity market trends failed to extend into January, as cyclical-oriented sectors lagged for the month. Consumer staples relinquished the most value, losing more than 5% for the month, while Industrials gave up more than 4%. The Energy sector held favor with investors, leading sector returns for the month and gaining nearly 4%, although still dramatically lagging all sectors over longer periods. 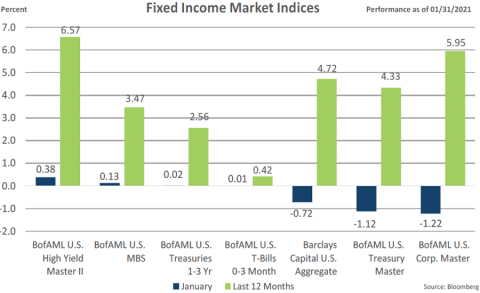 Yields on 2-year Treasuries declined by 1 basis point in January, while the yield on the 10-year and 30-year increased by 16bps and 19bps, respectively. This steepening of the yield curve, or the increase in additional yield for longer investments, indicates a growing expectation of economic expansion and the possibility of future Fed rate increases to dampen inflation. The rising rate environment led most bond indices into negative returns for the month, as bond prices move in opposite direction of interest rates. Generally, bond indices that hold longer-term investments trailed those with shorter holdings in January. Despite growing expectations, the Federal Funds Rate remains at zero and appears unlikely to change anytime soon. 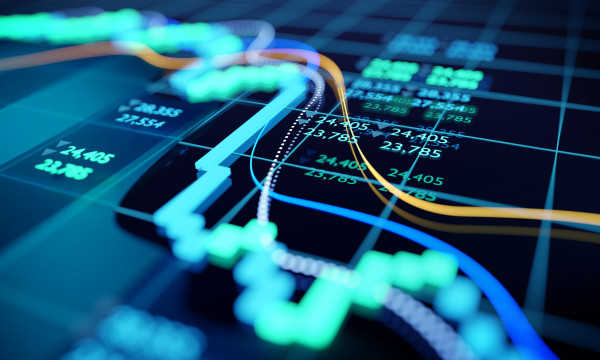