Starkly contrasting fears dominated economic discussion during the month of July. On one end of the spectrum are concerns about inflationary pressures due to rapid economic recovery and a continuation of low rate policy by the Fed. On the other exists the potential of another flare-up of pandemic-like conditions accompanied by economic lockdown. Unsurprisingly, the behavior of financial markets reflected this uncertainty during the month. While recent economic data has shown gradual but largely unremarkable improvement, July data appears to mirror the uncertainty of the current climate. June unemployment rose slightly to 5.9% versus 5.8% in May, much weaker than the expected rate of 5.6%. June CPI climbed sharply to 0.9% versus the 0.4% expected, sending the annual rate higher to 5.4% from 5.0%. Producer prices, as measured by the PPI, were up even more dramatically at 1.0% for the month and 7.3% for the year. In contrast, lumber prices have pulled back significantly from recent highs, though they remain well above pre-pandemic levels. The July ISM Manufacturing Survey declined to 59.5 from 60.6 but remained strong, indicating confidence among manufacturers. Meanwhile, the consumer remains steadfast, reflected in surprisingly strong retail sales numbers for June, easily beating estimates. Likewise, consumer confidence remains high, climbing to 129.1, its highest rate since early in 2020. 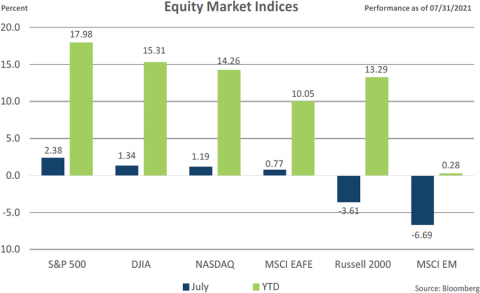 Despite experiencing some volatility and a mid-month sell-off, stocks generally appreciated during July. However, noteworthy variation to monthly performance was evident with small-cap (Russell 2000) and emerging-market stocks (MSCI EM) experiencing significant declines. As such, July stock performance was mostly driven by larger companies, as investors gravitated toward the apparent safety and stability offered by these investments. Leading returns among the major indices shown was the S&P 500, with a 2.38% gain for July, followed by the blue-chip Dow Jones Industrial Average (DJIA) at 1.34%. While most shown indices have posted healthy gains year-to-date, lack of investor comfort in emerging markets is evident as those stocks lag significantly for that period, as well. 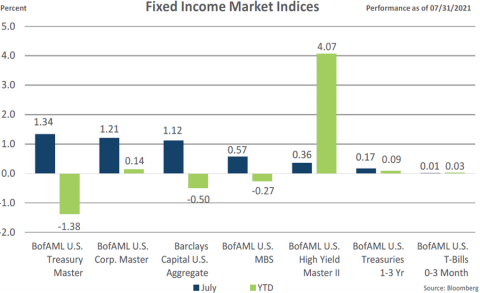 Despite pronounced inflationary data, interest rates dropped during the month of July. These rate declines led to positive performance for all shown fixed income indices (as bond prices move in opposite direction of interest rates). Consistent with the flight to quality discussed in equities, Treasuries provided the strongest returns shown at 1.34%, while high yield debt lagged indices holding longer maturities, providing a 0.34% return. Very short indices, such as 1-3 Year Treasuries and T-Bills, posted returns indicative of their coupon, as significant price movement is difficult for such short bonds. Despite recent data indicating inflationary pressures in the economy, the Fed maintains that such pressures are temporary and continues to leave the Fed Funds rate near zero.