Though the economies of the United States and the world continue the process of reopening and recovery, effects of the widespread lockdown remain. Supply shortages, though mostly subtle with little effect, can also be quite acute and costly. Lumber shortages have caused construction prices to surge, and computer chip shortages continue to hamper manufacturing of products from video games to automobiles. Stimulated (at least in part) by these supply shortages, inflation has become a major economic concern. The Consumer Price Index (CPI) increased 0.7% in May on a seasonally adjusted basis after rising 0.9% in April. Over the past 12 months, the CPI increased 5.0% before seasonal adjustment, the largest 12-month increase since a 5.6% rise for the period ending July 2008. Labor statistics are gradually improving. In May, the unemployment rate declined by 0.3% to 5.8%, and the number of unemployed persons fell by 496,000 to 9.3 million. These numbers are significantly lower than their recent highs in April 2020 but remain much higher than before the pandemic. Initial jobless claims also continued to trend downward throughout the quarter. GDP has rebounded from the initial shutdown and remained strong. Fourth quarter 2020 GDP growth of 4.3% (seasonally adjusted annual rate) was followed by an even more robust 6.4% during the first quarter of 2021. Preliminary consensus expectations for second quarter GDP growth are at 10%. 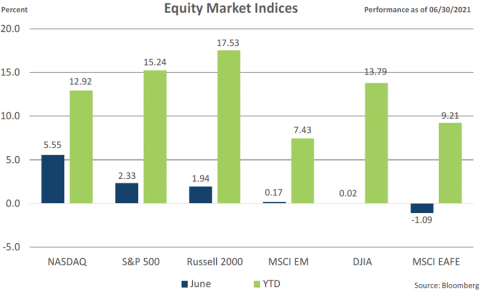 Impervious to a potentially bumpy economy and defying valuation concerns, equities continued to roll in the second quarter. During the quarter, the DJIA, the S&P 500, and the NASDAQ indices all set all-time highs. The second-quarter stock market was led by growth stocks, which reclaimed favorable status over value stocks. This is evident as the S&P 500 Growth Index easily outpaced its value counterpart, the S&P 500 Value Index, returning 11.93% versus 4.99%. Growth-stock-heavy indices, such as the NASDAQ and S&P 500 also printed notable quarterly numbers at 9.68% and 8.55%, respectively. Although lagging the large-cap growth indices, most other areas of the market, including small cap, value, and international stocks, still managed solid quarterly results. 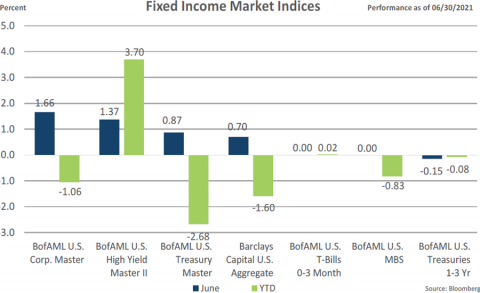 The second quarter saw yields on longer Treasuries decline, with the 10-year note declining by 27 basis points (bps), from 1.74% to 1.47%, while the 30-year bond declined 32 bps and the five-year note dropped 5 bps. By contrast, yields on the two-year note rose, increasing 9 bps to 0.25%. In harmony with strong equity markets, spreads (additional yield earned over Treasuries) on corporate debt declined during the quarter. Given the tighter spreads and generally lower yields, indices with longer maturity structures (U.S. Aggregate and U.S. Corporate) and more credit exposure (U.S. Corporate and U.S. High Yield) naturally performed best during the quarter. Municipal bonds also saw spreads tighten, leading to a strong quarterly return for those assets, as well.